Due to improvements in Passive Matrix OLED (PMOLED) technology, Futaba Corporation has successfully launched PMOLED into the Automotive OEM market.  As with any display technology, the end user should consider both the positive and negative aspects of the chosen technology.

PMOLED, as the name implies, is a passively driven array of self-emissive pixels creating a graphical type display.  Though fixed segment OLED, a statically driven OLED, is also available this article will mainly focus on the PMOLED graphical displays.

PMOLED is limited for luminance output based on the scan rate and energy available to light the organic material pixel.  In general, the higher the scan (frame) rate, the lower the luminance.  This scan scheme currently limits the practical automotive usage of PMOLED to an approximate array size of 168 x 256 pixels putting the industry common QVGA, or larger type display applications out of reach for PMOLED.  This same scan scheme limit in turn makes only monochrome applications practical as the color filtering used for a color PMOLED reduces the luminance further than a monochrome PMOLED making the luminance too low for automotive usage.

For reference, the typical automotive, white, monochrome PMOLED can provide 300 cd/m2 (500 cd/m2 for fixed segment type OLED’s) with white being the most common monochrome color but blue and red are also available.  The aforementioned luminance is after the inherent automotive grade Circular Polarizer (CPL) deemed necessary to enhance contrast for automotive applications.

Luminance can also vary at the pixel level to allow grayscale appearances through various IC and software sets.

Due to the nature of PMOLED’s self-emissive technology, there is no backlighting required because as the name implies, the PMOLED is self-emissive i.e. creates its own light without the need for backlighting.  Consequently, an All Off pixel condition will create a dead front appearance from the PMOLED.  The other consideration for dead front it to apply enough front lens darkening filtering to insure the inherent OLED mechanical structure remains hidden in the final application.

Figure 1 shows the typical PMOLED Contrast Ratio across a variety of ambient conditions. 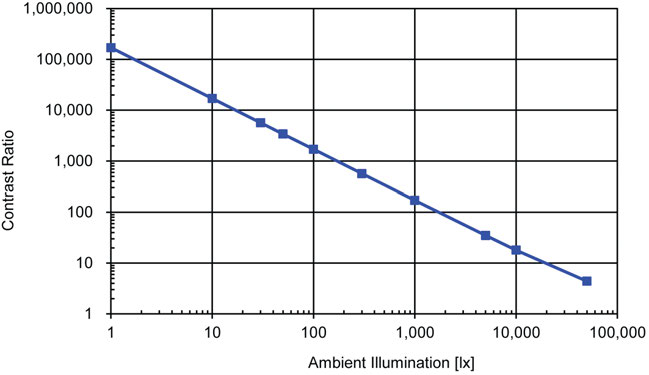 As implied above, the color palette available for PMOLED is not infinite.  Due to the special color ratio of organic material making up the pixel, available color ranges are limited and consideration must be taken to match the PMOLED capabilities to end user color coordinates.  The CPL filter can provide some additional filtering but it too will have finite color characteristics.

Though PMOLED is considered to have a wide viewing angle, as evident in Figure 2 below, the end user should also understand the effects of color shift at the extreme angles.  This phenomenon for PMOLED is due to variations of light refractions inside the PMOLED, as the viewing angles increases, causing a shift of light wavelengths that are visible to the eye. 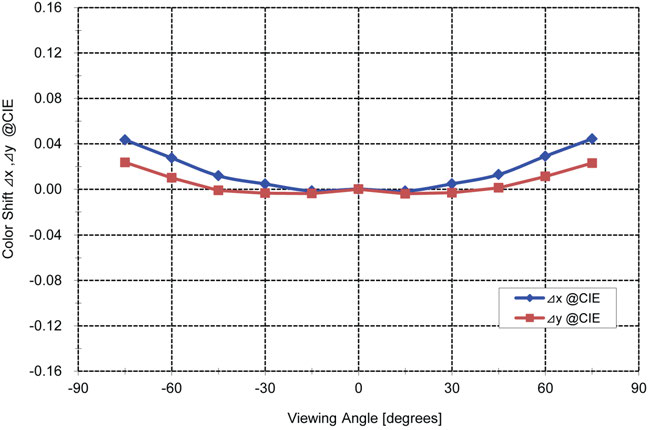 Depending on the application, power consumption could be a positive or negative aspect of PMOLED.  In general, the power usage is directly proportional to the amount of pixels lit.

PMOLED has been certified and tested to meeting various automotive OEM conditions.   Special, or extreme, conditions are evaluated on a case by case basis to determine any detrimental results from special test conditions.

Based on the custom size package options, and small package footprint, PMOLED can be designed into various non-traditional display applications such as control knobs, switches, and other such niche locations. The ability to add a “corner-cut” in the glass package provides additional packaging options.  At this time, a true circular type display is not available.

Another aspect of self-emissive type displays is the tendency to create a “burned in” image based on different pixel usage rates in the displays.  The classic example:  a single character displayed for a period of time can still appear as a “ghost” image when the character is no longer displayed and replaced with another character or background.  See Figures 3 & 6 while comparing lit and non-lit pixel areas.

Under normal operating time, PMOLED can expect to experience some color shift.  This can be accelerated under high temperature conditions.  See Figures 4, 5, 7, and 8 for 25°C and 85°C color shift data. 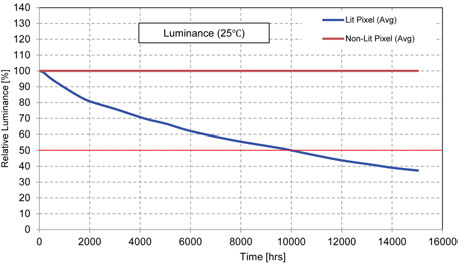 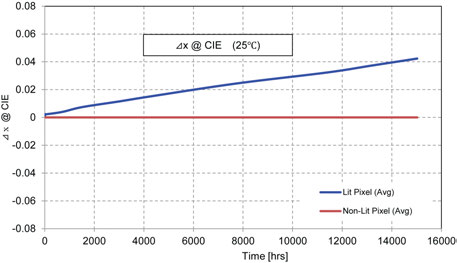 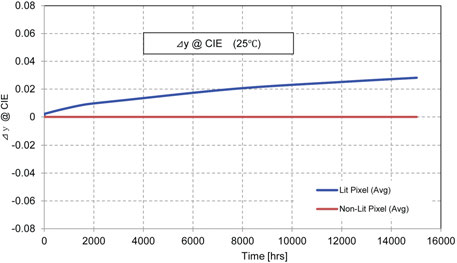 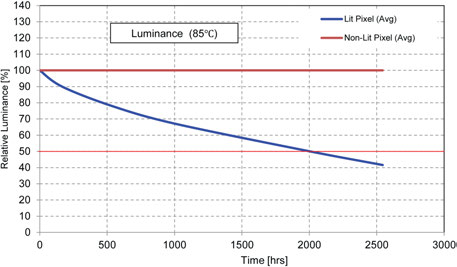 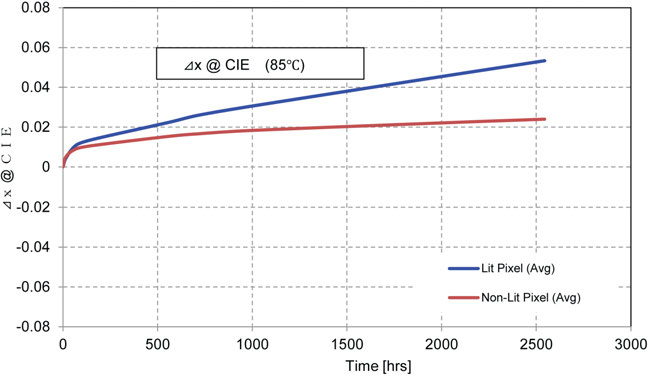 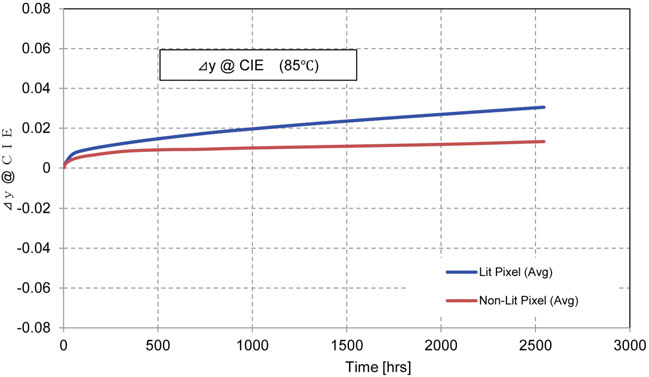 As with any display technologies, PMOLED has its own set of unique pros and cons based on its physical design and structure.  Consultation with the manufacturer will provide assistance in providing the overall best solution.